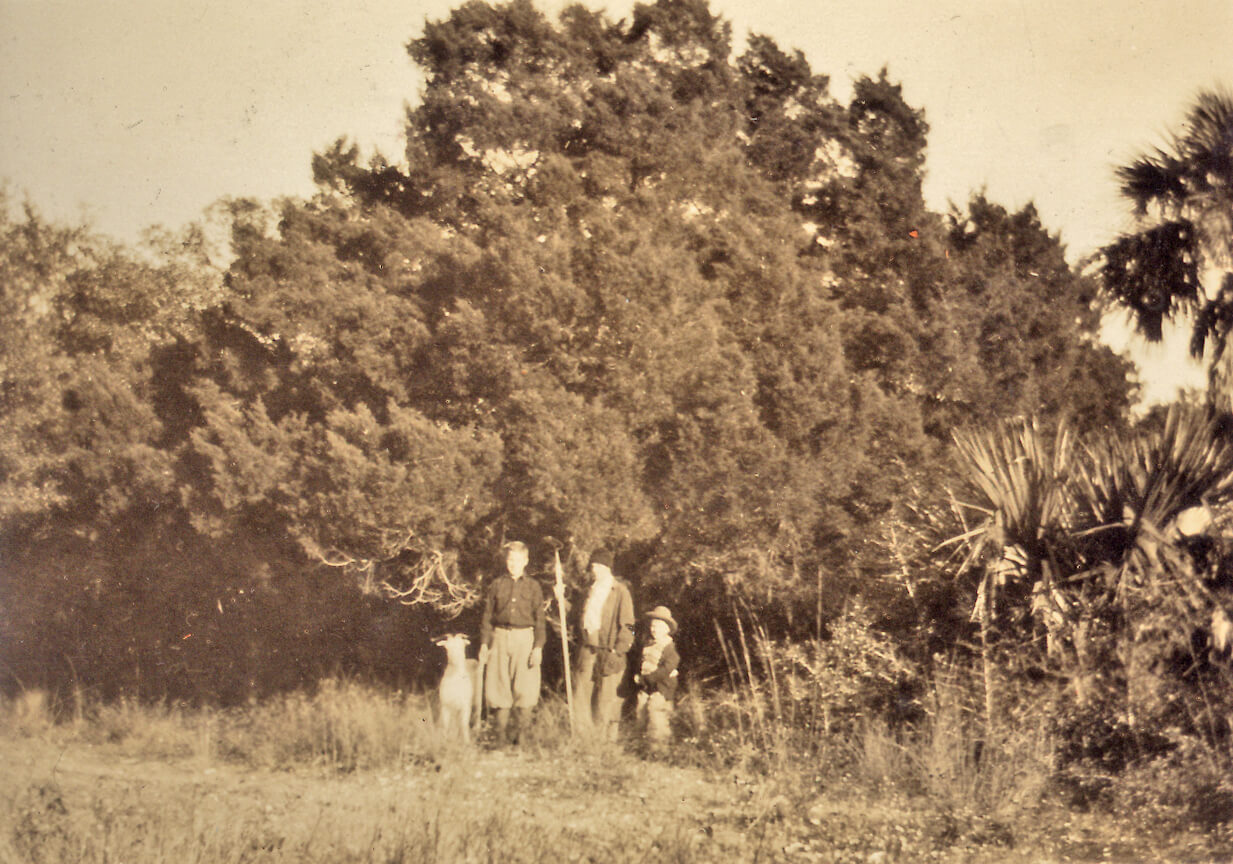 Back in August, the three Huyler siblings came to visit Dewees Island with their honorary family member Andy.  It was such a delight to hear their stories as they reminisced on the island.  Stephen followed up with some family documents he had scanned. First are some aerials from the time. 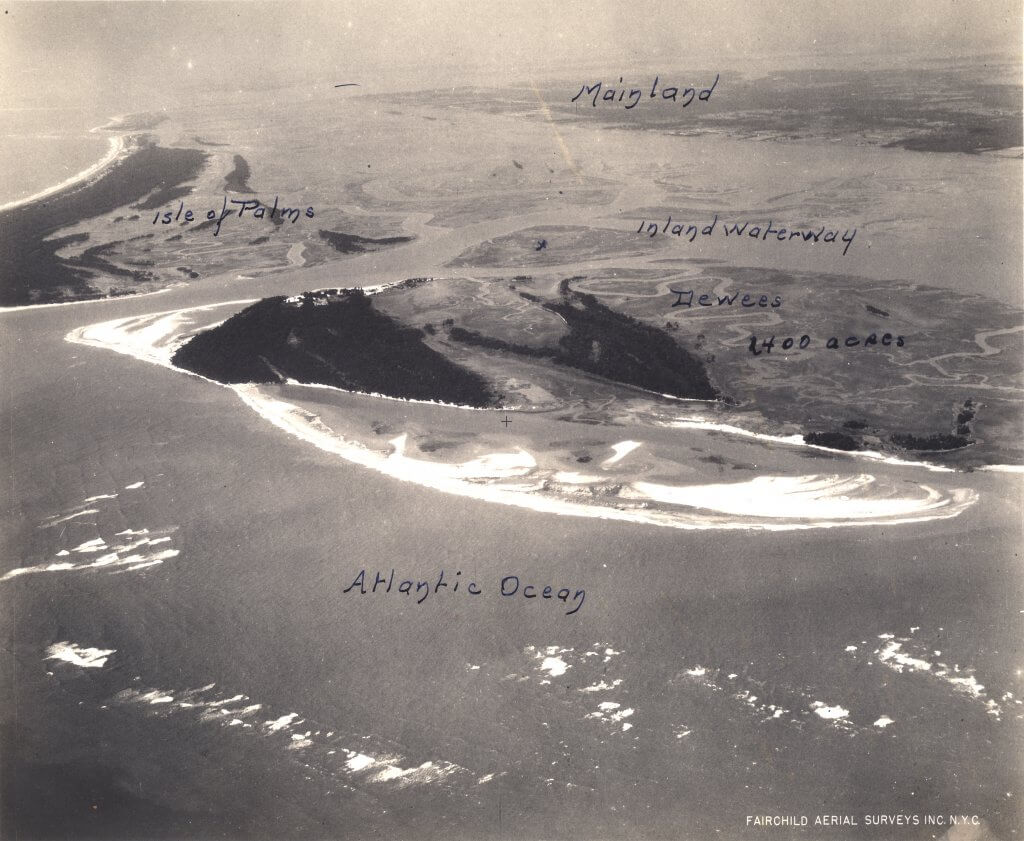 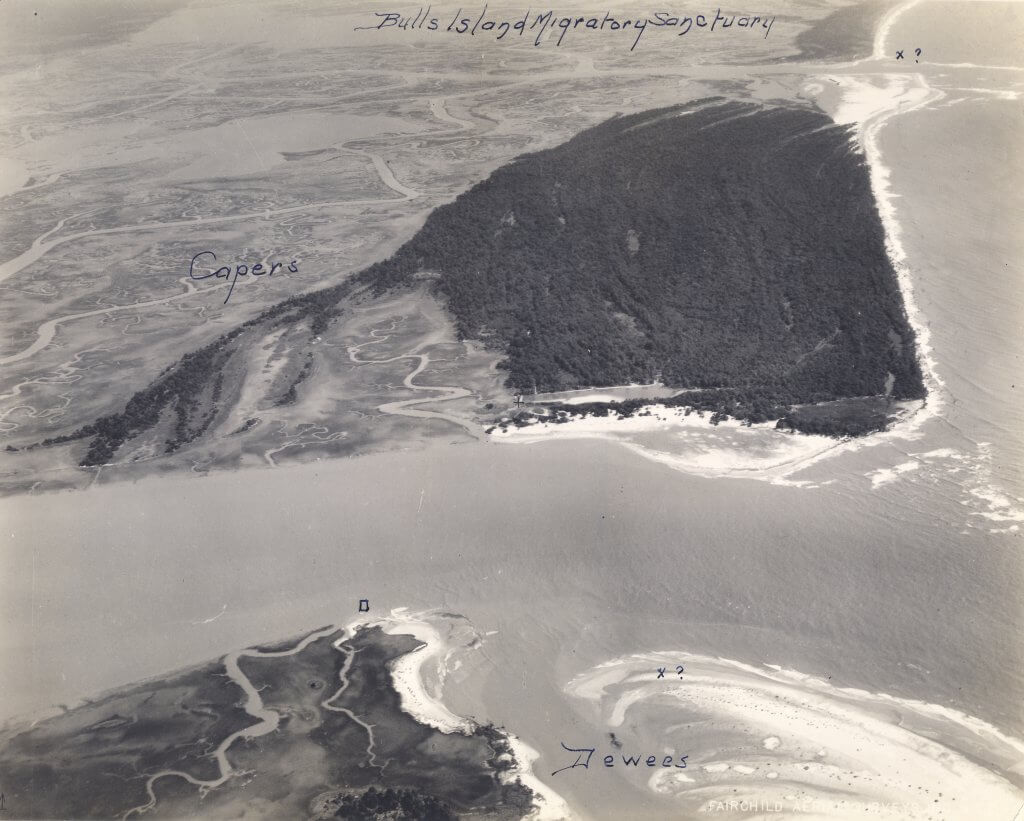 In trying to provide context for the family and island photos, I have pulled excerpts from the Huyler son’s memoirs.  Their mother remains, to this day, a hero of mine

In 1924, my father – a retired – or to be more accurate, I should say retiring candy manufacturer … That is in the literal and certainly not the figurative sense … decided that his heart’s desire was a sea island. He and my Mother visited Dewees and Capers during the summer of 1924 – and came home owning both islands – as well as a great many tick, mosquito and chigger bites … If I am not mistaken he paid $25,000 for Dewees and
$35,000 for Capers. 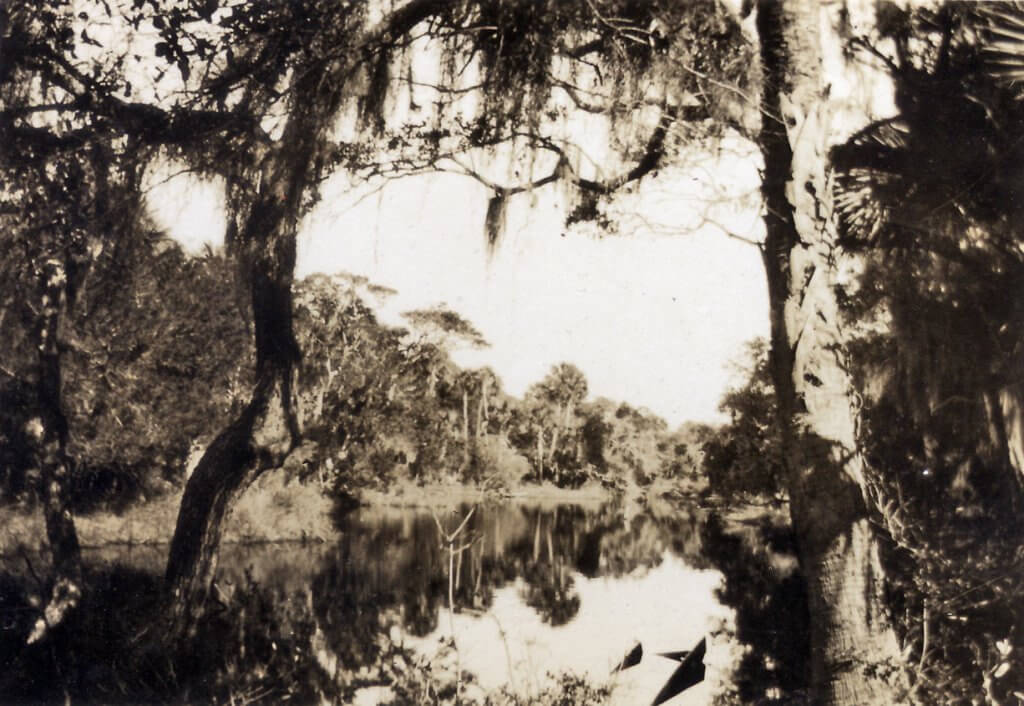 I can’t tell where exactly on the island this is: it might be along Lake Timicau lane or it might be looking at the current impoundment.

While the family was building their house along what is now Old House Lane, they stayed in the caretakers cottage on Capers, with the caretaker, a retired Bearded Methodist Minister named Mr. Moore and Jane the Mule.

As I may have indicated My Mother was a PLANNER … she said that Mr. Moore could keep his room … all the women and my small brother shared a smallish bedroom … I slept on a glider in the living room as did the Pregnant Cocker and the Canary: Mother ingeniously arranged a series of curtains in the bedroom for privacy … and we rigged canvas around a small porch for sleeping quarters for Mr. Pattridg and my “adopted brother”, Charles … old Jane though bothered by all the commotion, took up her nightly stand by the cracked chimney – thereby probably keeping warmer than any of us – and meanwhile, wild pigs shuffled, grunted and fought under the house … 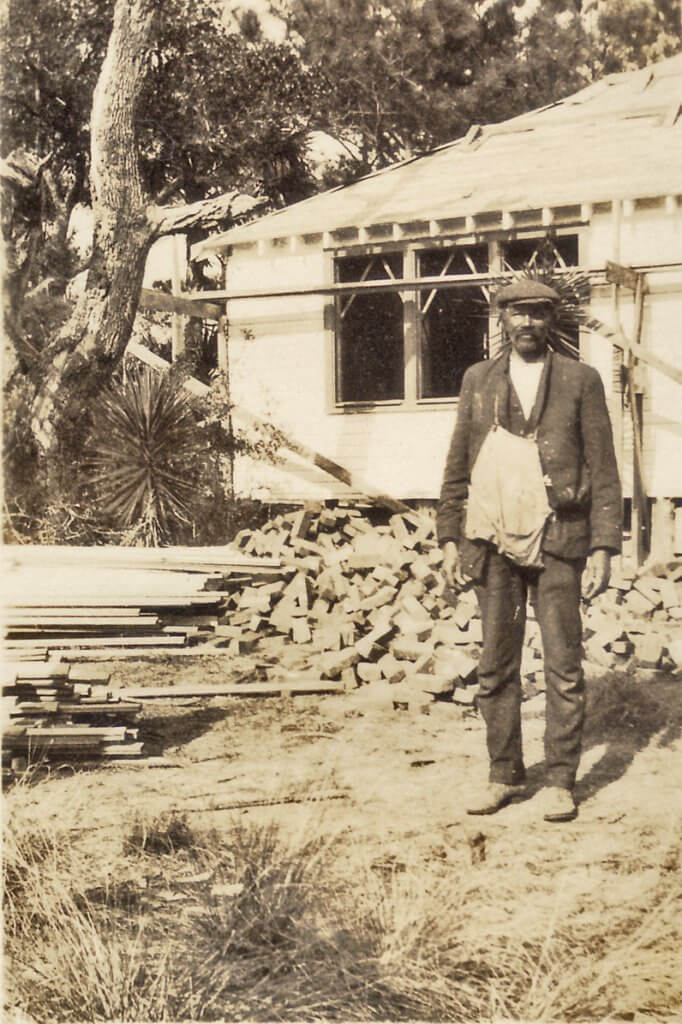 In order to move building materials from the dock to the house site, an ox and heavy-duty wagon had been pw-chased and installed on Dewees. Bully the Ox lived a long· life of useful and docile servitude during which he hauled many cargoes along the sand path from dock to house. On Capers resided a mule, Jane, too old and decrepit to do much more than haul groceries from the dock. I was never certain whether the large, two-wheeled cart held her up or she it.  (from Jack Huyler’s memoirs) 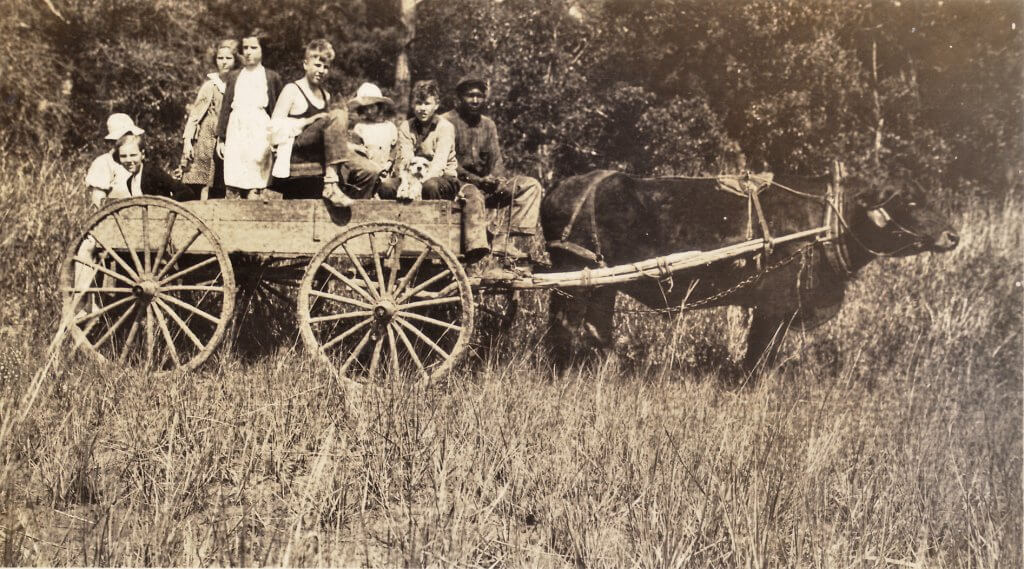 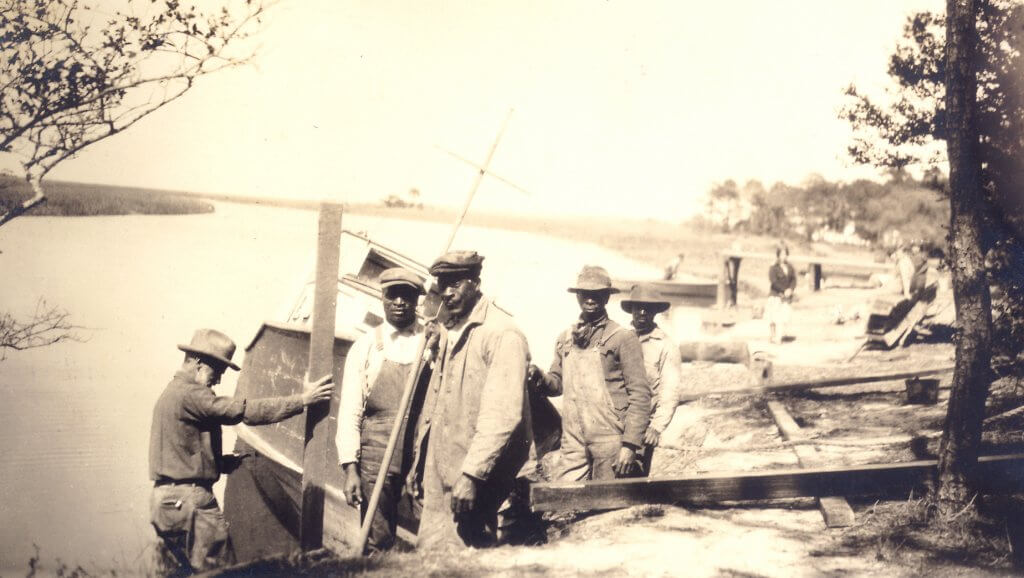 Almost daily the Huyler enclave boated from the tattered dock on the southwest side of Capers across the Dewees Channel to Lavender Point on the eastern tip of Dewees, and walked the length of the island so Mum could check on the builders’ progress. En  route we had to watch for snakes, which were many and varied. Razorback boars, with six-inch tusks were also to be reckoned with. They would, upon occasion, leave their rooting to charge us, for no reason which we could discern. (Jack Huyler)

Exactly when or what time of night I have no idea, but every one was in bed asleep when someone smelled smoke.  Fire, “Fire! Fire!” “Get blankets! We’ll need them. Get Jackie Put him on the blankets with a flashlight and Tumpy! Visualize a four-year-old in the dark on a large pile of blankets with a flashlight and a Cocker Spaniel that was barking at the wild pigs. The pigs, alarmed by the sudden running about overhead and by the smoke, rushed in and out from under the house grunting and squealing.

I was far from happy, but I dont recall crying. Mum did not like crying. “Crying doesn’t help anything!”

Intrepid Mum set up a bucket brigade from the hand pump a hundred feet away; and the flames were doused before any great damage was done. Only one interior wall was seriously damaged, though there was smoke damage pretty much everywhere. Everybody back into the house for some sleep.? I suppose I was the only one who slept soundly. 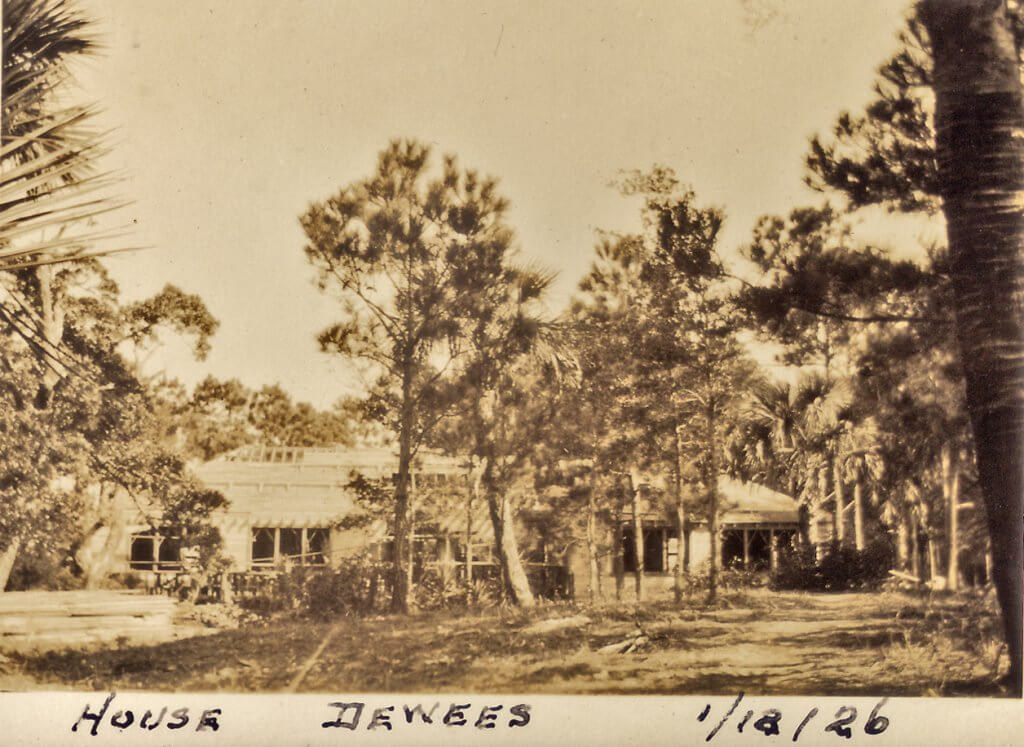 I believe it was the fire that persuaded my mother that the time had come to move from Capers to Dewees. Of course we had no plumbing at Capers – so that was rather chilling as winter approached as well … Unfortunately it rained the day that we moved. It was also unfortunate that the weather turned cold -and, in addition, the carpenters had not been as skilled as we had thought -so, when we moved into our new house there were no outer walls to the house.

Furthermore, there were no inner walls either. In fact, there was no roof over what was to become the living room -dining room and the carpenters quickly nailed down a temporary floor to accommodate us until more of our new house was built ••• There was no kitchen chimney though the living room fireplace was built … the electric plan had not been installed and, of course, there was no running water or.plumbing -but we moved in undaunted.

My Mother who had done the cooking on a woodstove at Capers gladly turned over to our Scotch cook and told her that she was sure she could learn to cook on a campfire and in the living room fireplace as well as the next one. Meanwhile, as the rain poured down, the workmen and stevedores moved furniture, comestibles, and the darn piano from the lighter to the area of the house and, as it arrived, the Carpenters built temporary covering.

My Mother said firmly that we might as well move in for if we did not, we might never have the house ready.

During the construction of the house, young Jack became friends with Cephas, the young man who delivered water to the crew.  The Huylers brought Cephas back with them to Connecticut during the winter.

Cephas and I would play between calls for water. What did we play? We tried to outmaneuver the fiddler crabs that populated the marsh and showed up by the hundreds when the tide was out. We made powerless bows to shoot unbalanced arrows fletched with turkey, chicken, or guinea hen feathers at wary ducks, guineas, or turkeys. They had little to fear. (Jack) 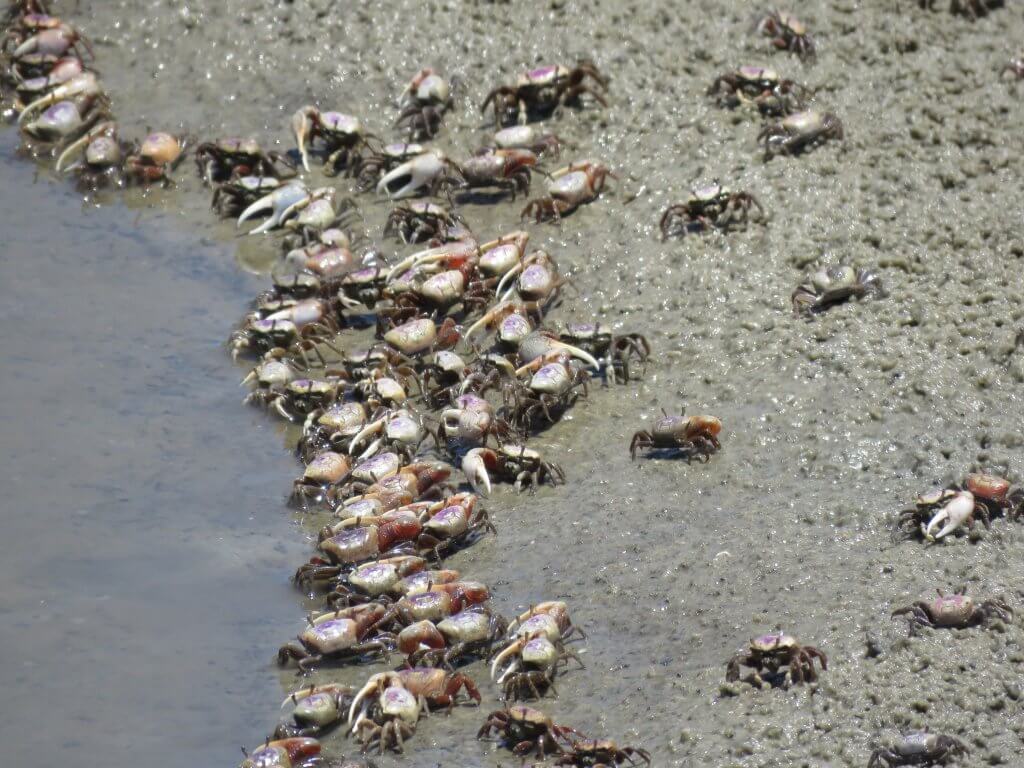 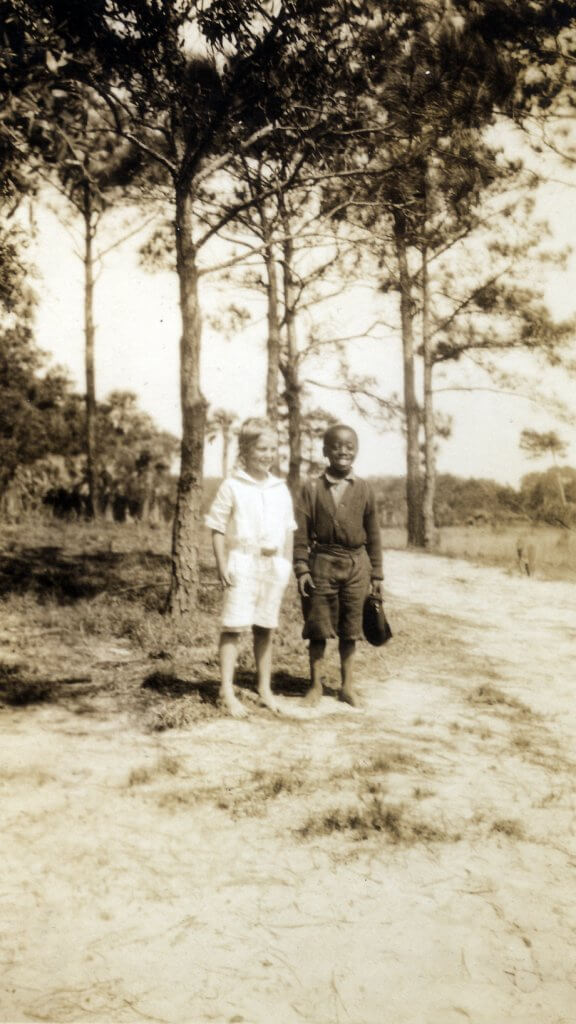 Cephas protected me from Billy, “my” goat. Snow white Billy was fine so long as I stayed in the wagon he pulled; but if I left the safety of that wagon, he would chase me. He had long, sharp, horns; so I soon learned to stay in the cart until I could drive Billy over near Coulter, Charles, or Cephas. 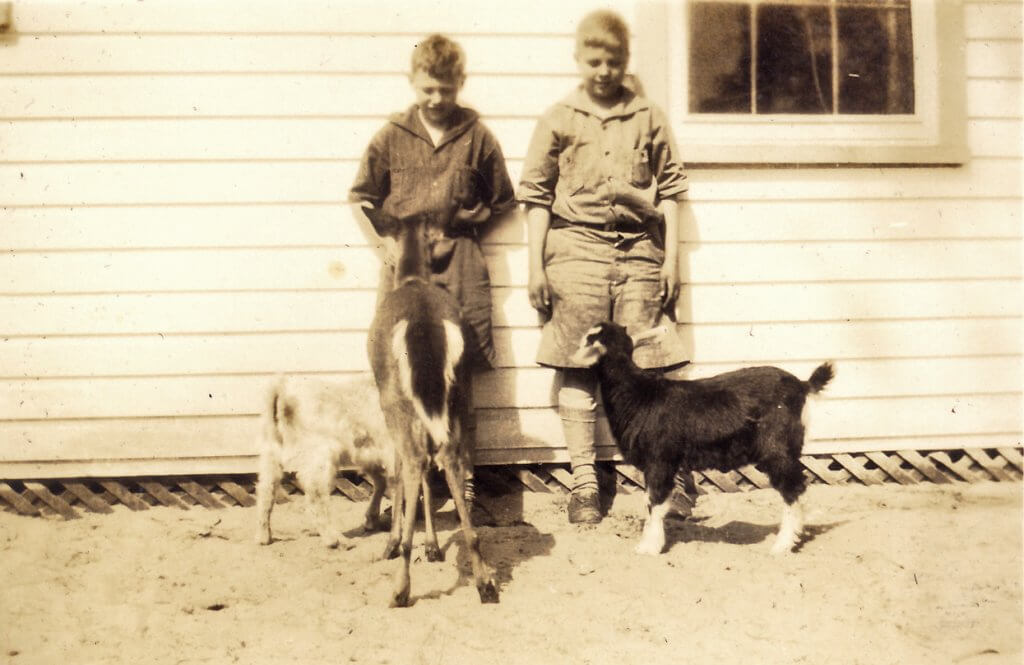 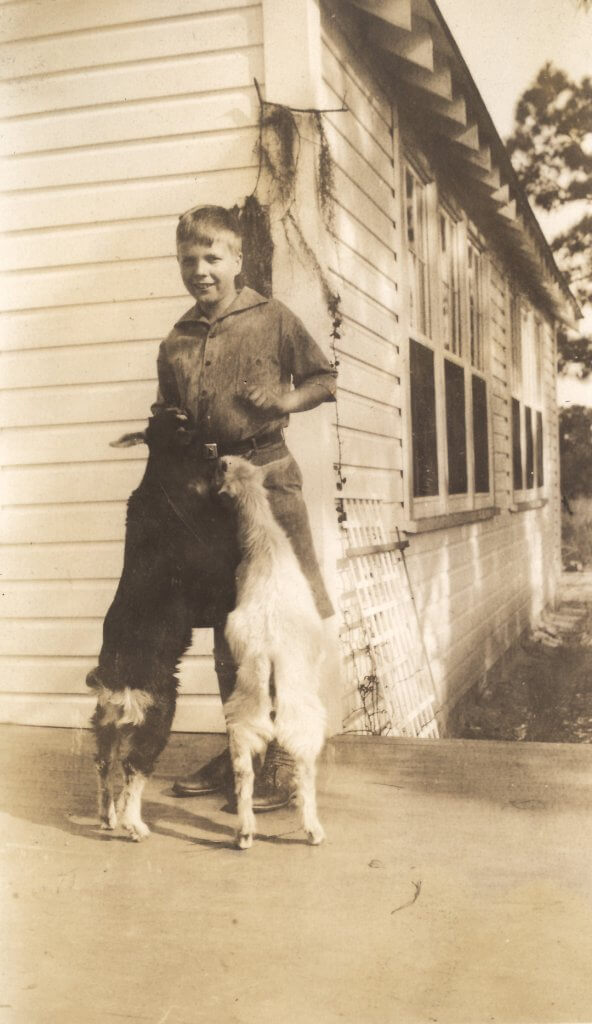 The goats continue into the Huyler memories into the next generation.  When Jack’s son John spoke with us at Huyler House in August, he said that one of his earliest memories on the island was of his grandparents’ Christmas tree (which was small) and the goat that ate the ornaments off the tree!

Now that the Dewees House was settled and comfortable, Mum invited Carrie Lee Porter (Grandma Porter) frequently accompanied by her crony and, I believe, half-sister, Aunt Sue Moseley, to spend the winters with us. (Jack) 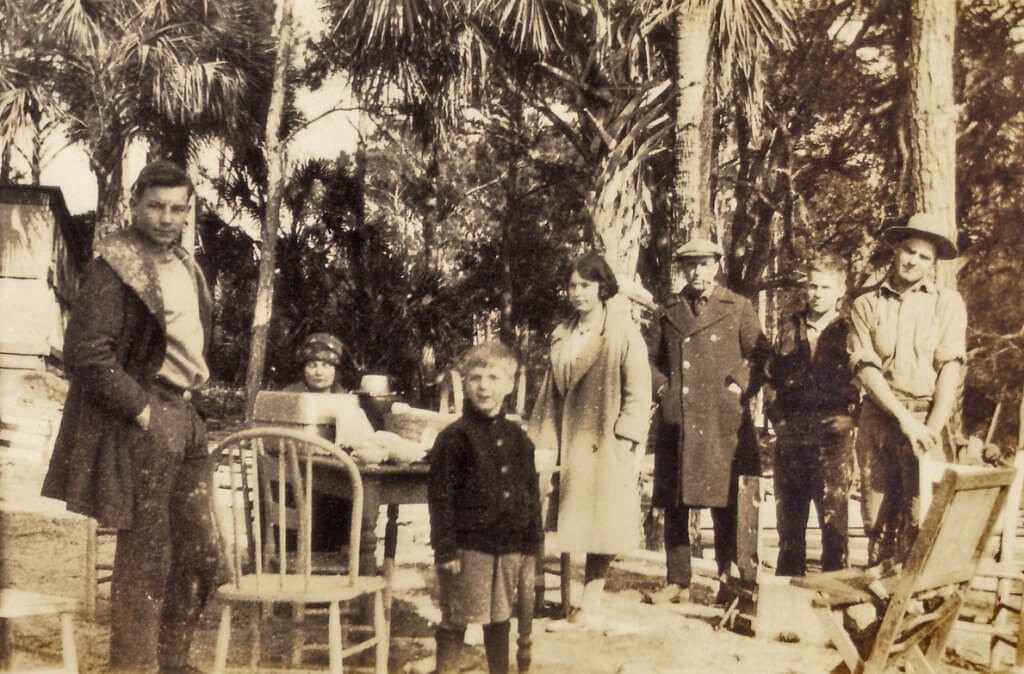 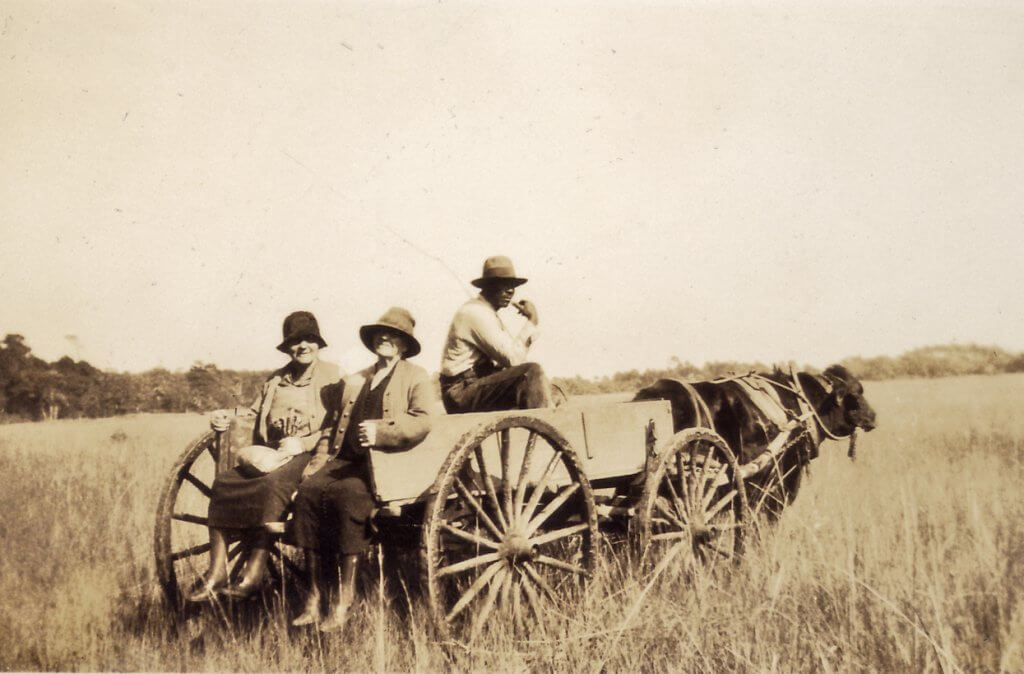 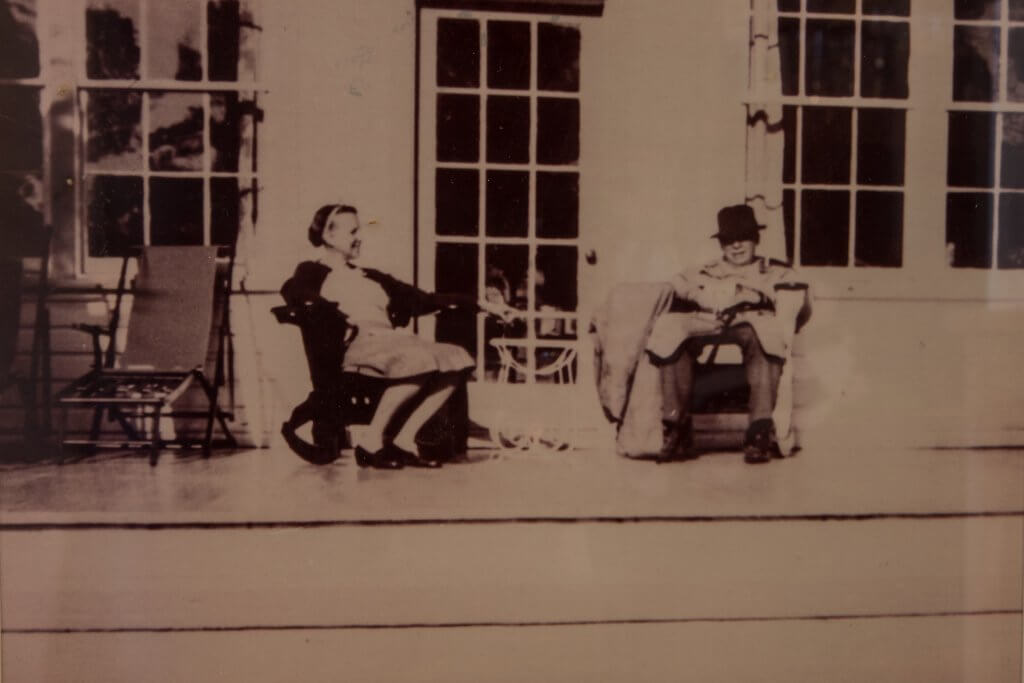 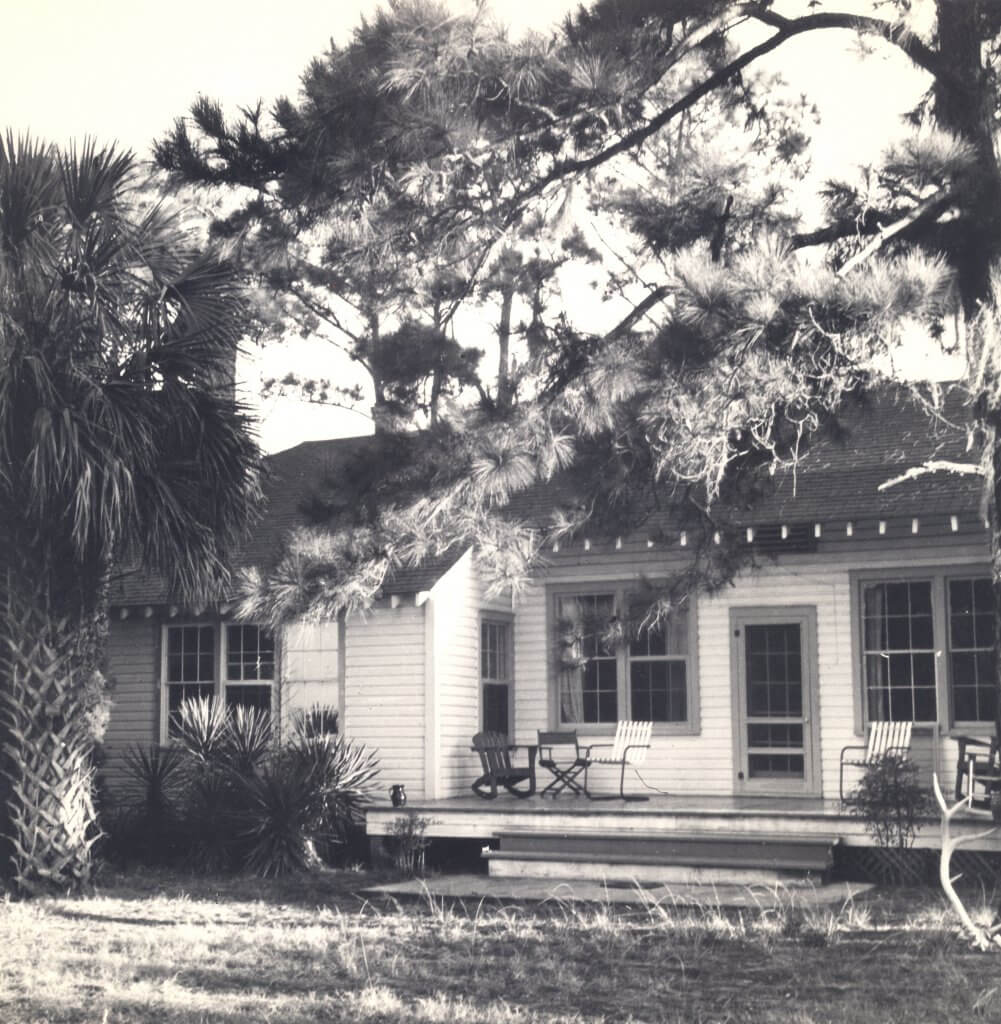 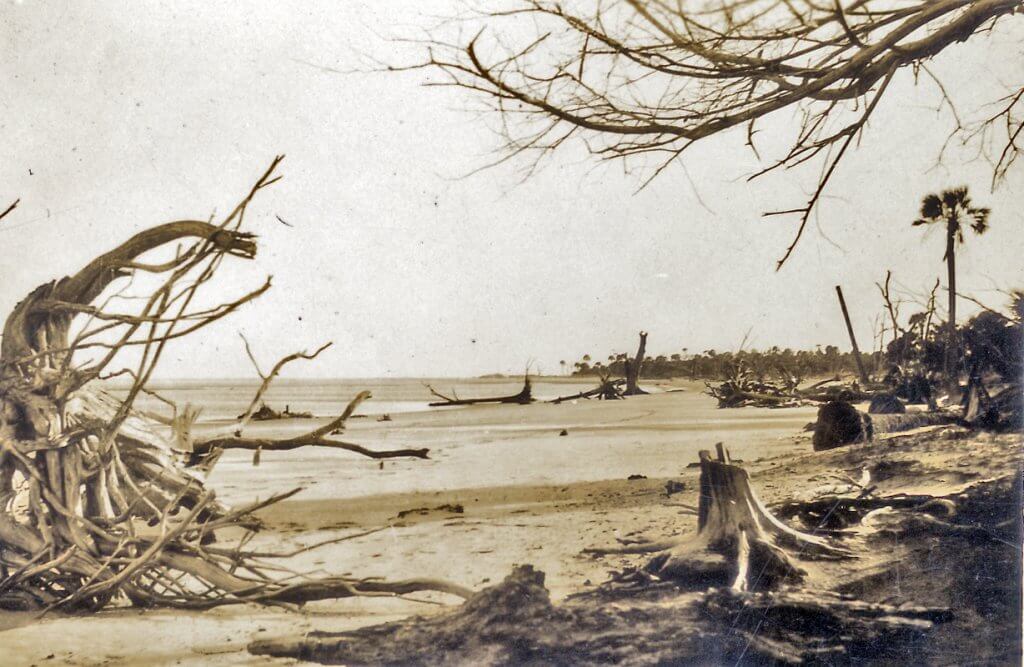 Here is a related post about the Dewees Community field trip to the landing in Mount Pleasant years ago.

On August 2, 2022, Jack and Margaret Huyler’s three children: Ruth, Jack, and Stephen came to Dewees for a tour and a visit. With them was their exchange sibling, Andy, from Germany.  It was such a treat to gather with them all at the clubhouse named after their family. They shared recollections with us: besides John’s recollection of the goats 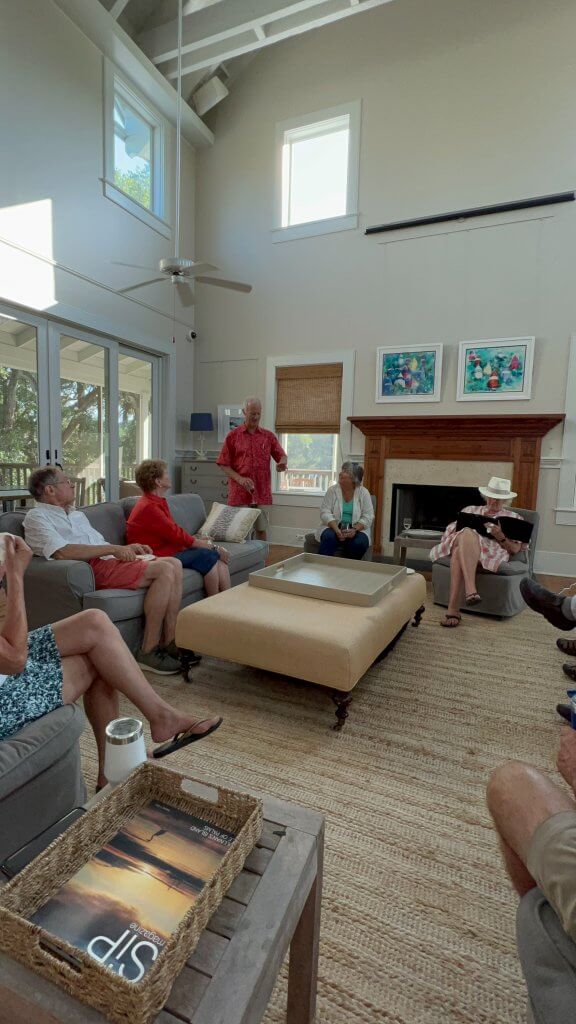 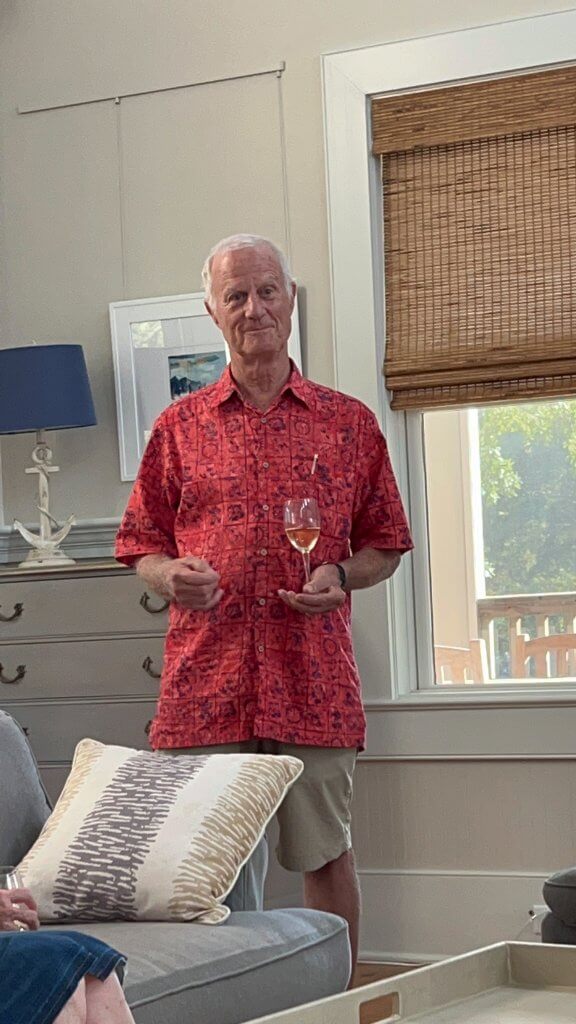 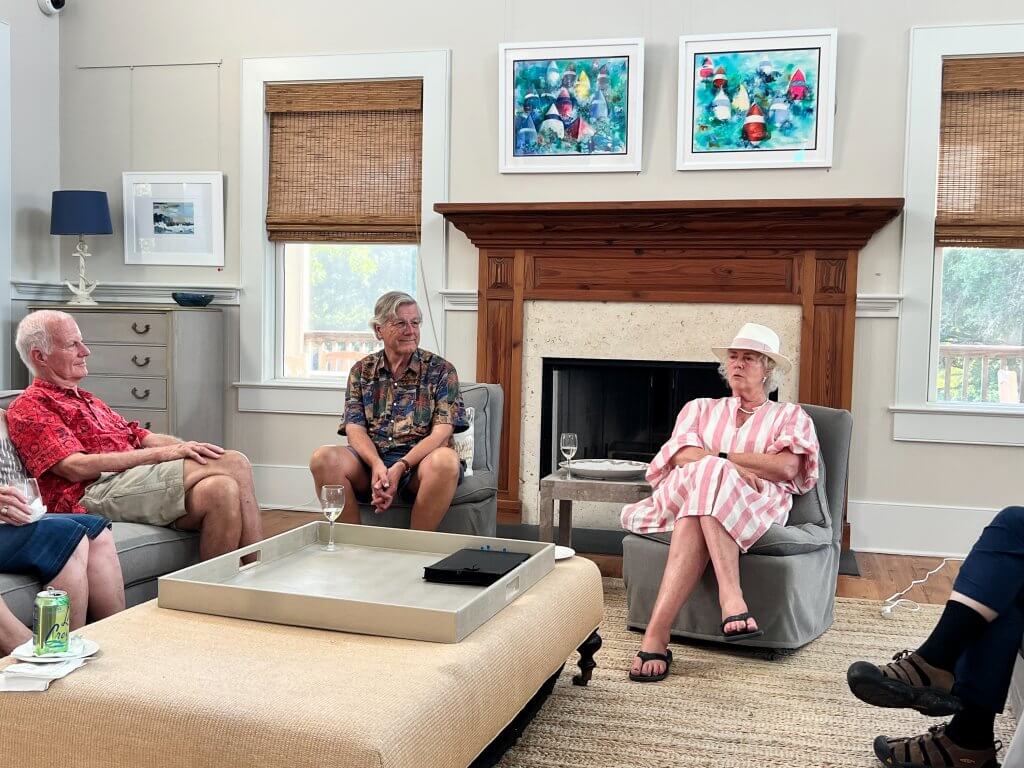 The Huyler siblings also corrected a perception in Jim Cochrane’s book: while his grandfather Coulter Huyler was a candy maker from the north, his grandmother was Margaret Porter of Asheville and Charleston.  His Porter relatives are still close, and the cousins get together often. I had been under the impression that Coulter was a northerner who didn’t want to spend Amelia Island prices for a warm island winter location and happened upon an ad for Dewees Island in the times.  In truth, this was a family coming back closer to a place that felt like like home.  This article has a lot of interesting information about the Huyler Candy business in New York.

The siblings’ parents honeymooned on Dewees, and appreciated the privacy and remoteness of Dewees.  (At the time, the north end of the Isle of Palms was undeveloped, so it was REALLY private.) Their parents were very much in love for their whole lives, and it sounded like there was credit for a little Dewees magic in that.

Several of our new owners enjoyed comparing their own moves to Dewees to some of the descriptions of the Huylers. 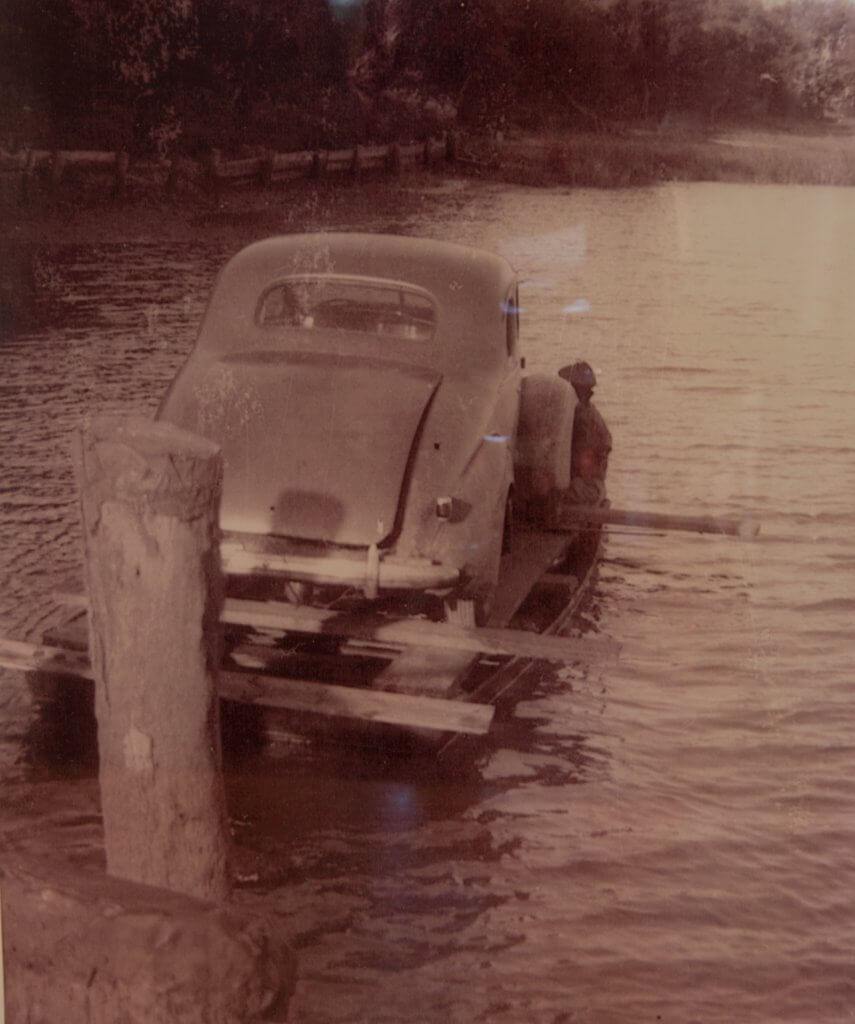 Annually Mum rented an upright Steinway piano in Charleston, which was transported to Dewees in a huge wooden packing case on the deck of The Ark. The case had a strong wooden bar at each comer by which it could be carried. There were no real problems involved in loading it in Charleston, for the wharf was stable and broad; but unloading it at our Dewees dock was another matter for there were steps, narrow steps. Planks were run from the deck of the Ark to the shore. The planks had been made slippery by water and mud from the rubber boots of the colored men ascending them to carry the piano down.

What a treat it has been to get to know these children of Jack; grandchildren of Coulter and Margaret Porter Huyler.  Steven has promised to send me more memoirs and information when he has a chance.  In the meanwhile, I stumbled on Ruth Huyler Glass’ post about her father here, and found the wonderful video below, which gave me a chance to get to know the boy in the goat cart!

Stephen has connected me to other members of the family with other information to share, and it would be such fun to have them visit some time.  Until then, I love this closing from his Uncle Coulter,

I just hope (and believe) that you and yours love Dewees as much as we did and how I wish you joy there.