Our MOTUS tower has been active for eight months now and I will admit to checking the data every day here.  Using radio towers to collect and distribute information is not new technology, but applying the methods to birds so we can learn more about where they go IS a relatively new approach. In this blog post (which includes our tower), Jen Tyrell of Audubon South Carolina describes the tower:

Radio telemetry uses radio signals and receivers to track birds. Small nanotag transmitters are temporarily attached to birds, bats, butterflies, or even dragonflies. These transmitters send out a signal a few times every minute that can be picked up by a receiver along the way, specifically a Motus tower. These towers have antennas that can pick up the signal from a tagged individual if they fly within a few kilometers of a tower. Staging these towers along migration routes creates a virtual net to capture the animals’ information. Imagine having check-points along migratory routes to see which path they’re taking. These towers connect to the internet and download tag ID numbers as they are detected in real-time, giving the researchers who deployed these tags the whereabouts of the bird as the individual migrates. The towers are the perfect blend of old and new technologies to make understanding the mysteries of migration more affordable, comprehensive, and collaborative with a wide range of hosts and partners deploying tags and hosting towers. The result is a better understanding of the full life cycles of imperiled migratory species in a cooperative scientific approach.

Migration has captured the imagination of naturalists and scientists for ages.   We have other means of studying them: we’ve been banding birds for a century (and Dewees participates in this occasionally, especially with painted buntings). But finding out information about a banded bird is largely contingent on recapturing the same bird.  Geolocators can also be placed on birds, but they also require the bird to be recaptured in order to read the data. Large migrations can be tracked on radar, but they don’t give us specifics about individual birds.

Recent applications of telemetry have given rise to some new ways to study this migration.  Here is an explanation of the whole system at motus.org. (along with their infographic) 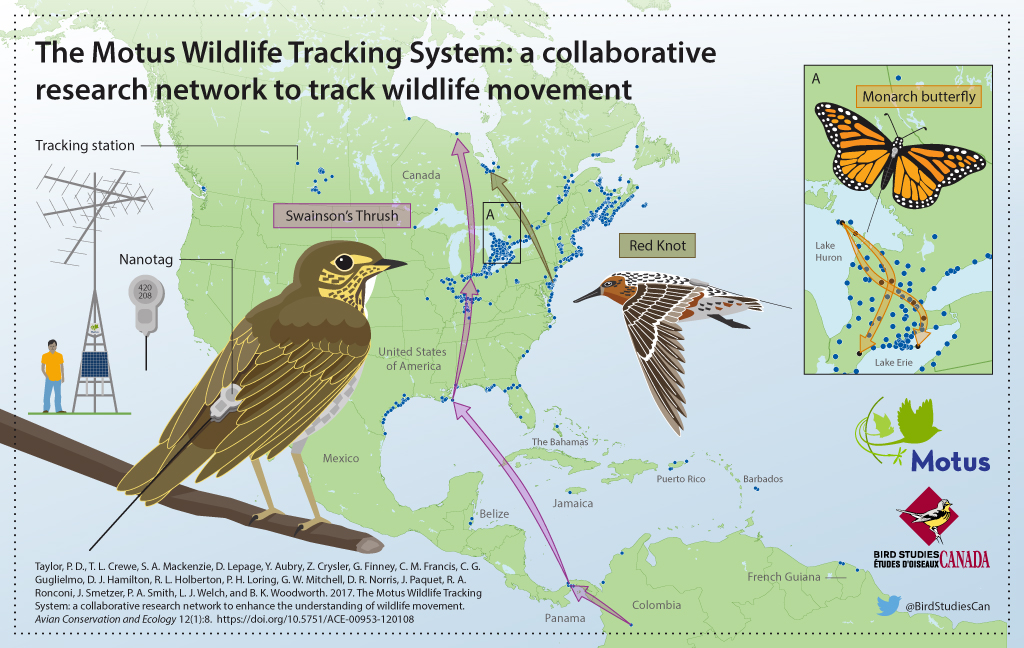 The Dewees Island Conservancy funded a tower, which we erected at the top of the landings building.   The “brains” of the tower are a machine called a sensorgnome, which records the data and sends it to the cloud network of researchers to compile the data.  Wildlife outfitted with nanotags fly within 15 km of the tower and register with a ping, so that the researchers can see where they go.  I think the most exciting part of all this is that it gives us the information to tell the story of an individual bird: where it winters and where it nests. Here are some interesting things we’ve learned thus far.

We’ve had a total of 40 different individuals with nanotags register on our tower.  Some of them have registered many times, others just send us a ping when they’ve passed by.  Of the 40 birds, 21, or just over half, were Red Knots, a species of concern that migrates from South America to Canada and back each year.  One of those birds stopped by on his way to Canada and then popped back in on the return journey. Another registered in Hampton Roads, Virginia on July 31, and here on August 1, flying 350 miles in a single day.

Including the Red Knots, we’ve had a total of 13 species register on our towers: Ruddy Turnstone, Semi-palmated Plover, Short-billed Dowitcher, Piping Plover, Common Nighthawk, Sora, American Kestrel, Clapper Rail, Chimney Swift, Common Tern, and a Rusty Blackbird.  The last one is pretty exciting~ it’s not a bird I’ve ever seen here. And now I know to get out there and look. One day I spotted a Kestrel outside my office window~ the next day one showed up in the data!

We have common nighthawks here, but when I started crunching the numbers on this guy, I was amazed.  A Common Nighthawk was first tagged in Canada in the fall of 2018.  In the fall, it left Canada and came past Maryland, and then FLEW to Central America~ 2052 miles over four days.  He spent the winter in the tropics and returned to the same towers for most of the summer, and when it flew south again, it came past Dewees.  I actually check his data every day to see if he registers on the same towers in Central America, but so far I’ve lost sight of the bird… or the transmitter battery died after the 18 months it’s been recording.  Carl Miller captured this photo of a nighthawk one summer on Dewees… It’s such fun to imagine where it might be right now.

I’m really excited about all the applications to understand more about where birds go, how they don’t really understand borders, and the dangers they face, as well as the incredible journeys they perform.  And each day, the network of towers grows~ we are now finding individuals that register both here and the Fort Moultrie tower. If the batteries last through the winter, it will be so interesting so see when they return.

Want to help?  Feel free to donate to the Dewees Island Conservancy.  Maybe we can fund some nanotags for nesting buntings or other migratory species.  Each nanotag is about $200.  And feel free to ask me about this any time… I get so excited!