We’re pretty excited about some changes coming for the North end of Dewees Island: The Lake Timicau Restoration project. After several years of studying the hydrology of Lake Timicau, searching for better ways to provide habitat for migrating at risk birds and provide water flow through the Impoundment, we are seeing our efforts come together! This project has been on my radar since becoming chair of the EC (ERB, EPB) in 2005, so it’s been a long term goal for the island. Since I get a bunch of questions about this, I thought I’d try to explain what will be happening over the next year. Disclaimer: I am not a hydrogeologist or an engineer.

The pipes are aging and don’t keep enough water in the Lake for long enough periods of time.

Ages ago, the pipes were placed in Velvet Creek and the bridge was created over the creek, making the north part of the island accessible. These pipes have a few current limitations, and we’ve known there would be a need to fix the situation for at least 12 years, when the Wetlands Committee was formed to examine the problem and propose a solution. For years, the Water subcommittee spent a lot of time and energy and resources looking at this situation from a variety of angles. The pipes will eventually fail due to age, and the way they were situated allows less water to get in and stay in Lake Timicau over time.

It’s possible that they are too high to move water throughout the entire area, or that the hydrologic period compounds the situation: We get longer low tides than high tides and the 6-pipes structure compounds this. Anecdotally, the depth of the Lake doesn’t seem to be as deep. It is also possible that there has been some silting in of the areas around the edges. There is currently some increased vegetation along the edges of the lake, and parts of the Lake that are dry for very long periods of time. In addition, the water that flows through those pipes is heavily compressed (think of putting your thumb on the hose) which increases the speed at which the water flows. This acceleration adds to erosion around where the pipes are. If we could better manage the flow of water coming in a 6-pipes, perhaps there will be less velocity, less turbidity, and less silting.

Shorebirds are declining worldwide, and many are on target to become extinct in our lifetime. Lack of habitat, of suitable foraging and resting sites, and of food to fuel up for long migrations all contribute to rapid declines in shorebird populations. If we could manage the water levels in the Lake Timicau area, we could create optimal habitat for food resources, shelter, and resting habitat for many of these imperiled species. Some of these include: Red Knots, Wood Storks, Whimbrel, Long-billed Curlew, Sanderlings, Semi-palmated Plovers, etc.

The goals of the Lake Timicau restoration project are to:

Other possible outcomes include a wider variety of opportunities for fishing, enhanced passive recreational activities, like kayaking and bird-watching. and more open views for lots that front Lake Timicau along Lake Timicau Lane and Pelican Flight drive.

Replace the Pipes with a more comprehensive, stable, and sophisticated water control structure. The engineers have come up with a plan to replace the pipes with two water control structures similar to what used to manage the water in the impoundment, but they will be made of concrete and aluminum. They will allow us to control (manage) the levels of water in Lake Timicau in order to be able to provide better habitat for shorebirds and migrating birds; as well as fish and crustaceans. This should make the area more stable in terms of erosion as well.

Put in a water control structure at the area now known as One Pipe, so that more water can flow through to the northwest section of Lake Timicau and we can control the in-flow and out-flow of water through that part of the Lake. 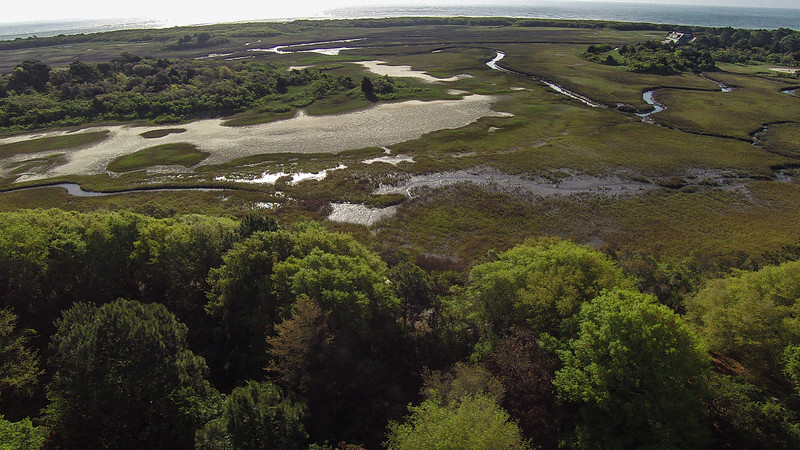 This means that the community decides how much water to keep in the wetland and for how long (based on management goals and objectives and grant requirements): it will no longer be strictly tidal. In my understanding, this won’t change the water depth significantly along the edges (a couple of inches), but there will still be deeper pockets for fishing. Since the intention is to provide better habitat, there will be an emphasis on understanding and attracting invertebrates that migrating birds feed upon. An additional result will probably be that some of the surrounding vegetation will have their roots immersed for longer periods of time and may die back, and may provide additional views. Like the impoundment, there will be times when we keep the water higher for fishing and recreation, and times when we drop the water levels so birds have resting and feeding places.

DU’s regional engineer, Malcolm Baldwin, has mapped, surveyed Lake Timicau and designed the canal route. The water control devices have been successfully used in other Ducks Unlimited projects, most recently on Capers Island.

The entire project has already been budgeted for. The majority of the cost is being paid by our partner organizations: Ducks Unlimited, and the US Fish and Wildlife Service. The total cost of the project is expected to be $510,000. The Dewees Island POA has already collected reserves of $107,000 as part of our planning and budgeting process, which represents the total contribution of the POA. The Dewees Conservancy, a non-profit 501c-3 corporation based on the island and dedicated to habitat preservation, will also contribute $107,000. The grant that provided most of the money is a USFW North American Wetlands Conservation Act (NAWCA) grant.

Octopus at the Dock

A great time of year to see American Oystercatchers