I saw a swallow-tailed kite on Dewees! This is a new bird (for me) on the island, and I might have frightened the real estate clients who were in my cart, because I shrieked, pulled off the road, and jumped out of the cart while jumping up and down.  Swallow-tailed Kites have been recorded on Dewees in the past, including during a bird count, but I haven’t seen one.  I think they have been here on and off for a few weeks: I got a call about a huge tern with a forked tail from renters John and Michelle in early July, as well as a text from my neighbor Jim Mack asking what the very large white bird with a forked tail was that soared past quickly over the impoundment. Since I didn’t get a good photo, I asked some of my favorite local nature photographers Pam Ford, Keith McCullough, and Nolan Schillerstrom for illustrations.

A Swallow-tailed kite is a big bird, with a wingspan of 51 inches, and a big forked tail. They are mostly white on the underside with striking black edges against that white plumage. The one I saw was flying fairly low over Pelican Flight Drive. They pluck insects and lizards from the treetops, and might even make off with a whole nest of blue-gray gnatcatchers, a tiny bird that does nest regularly on Dewees. They usually eat their prey while flying. The one I saw was sort of swooping for insects. Swallow-tailed kites are about the same size of a red-tailed hawk, but weigh about half as much. They are getting ready to begin some pretty significant migrations to Central and South America, and this website has a lot of information about them and is collecting citizen science data on sightings.

Audubon, in Birds of America described the swallow-tailed hawk,

Gliding along in easy flappings, it rises in wide circles to an immense height, inclining in various ways its deeply forked tail, to assist the direction of its course, dives with the rapidity of lightning, and, suddenly checking itself, reascends, soars away, and is soon out of sight… Their principal food, however, is large grasshoppers, grass-caterpillars, small snakes, lizards, and frogs. They sweep close over the fields, sometimes seeming to alight for a moment to secure a snake, and holding it fast by the neck, carry it off, and devour it in the air.

Dewees Island does not provide appropriate nesting habitat for them, but they do nest north of here in the old growth freshwater forests of the Waccamaw Wildlife Refuge, and they can be seen in nearby Francis Marion National Forest. I’ve also seen them at Caw Caw county park. They may pass Dewees on their migration route to central or south America. This video from South Carolina Audubon has some great footage and information about these gorgeous kites. (watch in hd if you can.)

Here is a link to an ebird map of sightings.

South Carolina Audubon’s Sea and Shorebird warden, Nolan Schillerstrom, ventured to Allendale where kites were converging to migrate south.  He took this photo and the one on the top: 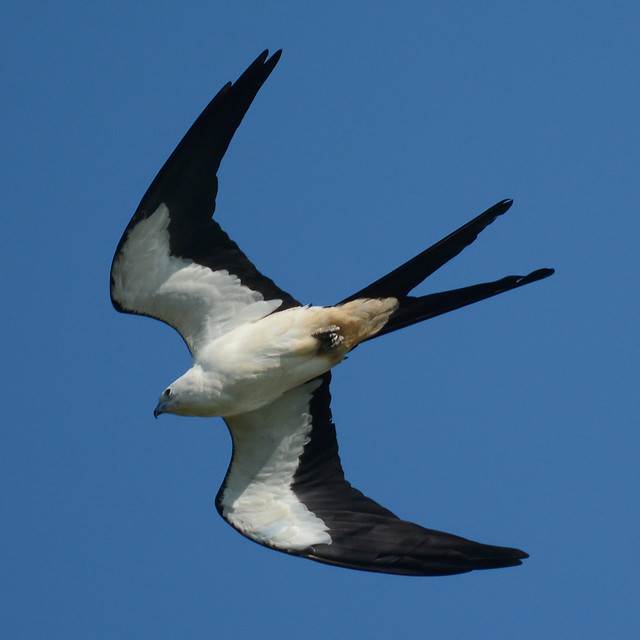 This blog post, by Cathy Miller, describes a field trip to Allendale SC in early August of 2013, also when kites were staging for migration to South and Central America.

I think that’s a trip we’ll have to make next year!  In the meanwhile, there are some interesting kites to follow through migration on this website.