The newest Arts Council exhibit at Huyler House features the work of Susan Mashman and Esther Doyle.  It has been up since January 16, and you need to be sure to catch it before it’s taken down for the annual POA Homeowner’s weekend.  Called Differences and Similarities, the show explores really interesting art from these two island artists. In addition, they are both donating proceeds to the Dewees Island Conservancy, so stop by and pick out your art whenever you get a chance.

Susan Mashman is a calligrapher with 30 years of professional experience. She did extensive training with the Queen’s calligrapher, and ran a successful calligraphy business in Connecticut, where she and her employees contracted for weddings, stationary stores, etc. This exhibit is her first big art show, and it features her exploration of calligraphy and the intersection of art and the demise of the handwritten word.

Her work uses an ascemic language: the letters and structure are familiar but they have no actual meaning.  The fact that it’s not real language is her comment on the fact that students no longer learn handwriting in school, and with digital communication, the art of handwriting is fading with each year.

Changes in our society have been making the need for hand lettering less and less necessary, and this skill may even be on the verge of becoming defunct! Children are no longer pressed to learn penmanship; instead from an early age, they are using tablets to communicate. Adults are emailing and tweeting and facebook; shopping lists are on phones, and no one has a pen or pencil on hand.  Indeed, mankind seems to be losing the skill of handwriting.  To me, this loss is a tremendously important step. For thousands of years, mankind has written words creating a direct link between the writer and the reader.  Sadly this bond is, if not disappearing, certainly irrevocably changing the need to write by hand. We have also created the emoji, a symbol which can substitute for an entire paragraph or thought.  With this exhibit, I have tried to document these changes in our civilization.  My canvasses represent our past as our letters lose their meaning and become ASEMIC. They have remnants of hand lettering and are “letterly,” but are not legible.

Esther Piazza Doyle is an island resident who works with a variety of media. Her work in this exhibition is an incredible series of drawings using scratchboard art, a medium Esther is drawn to because of the incredible precision it allows.

SCRATCHBOARD  art originated in the 19th century in Europe and is a form of direct engraving.  Under a top layer of black India ink is a layer of kaolin clay on a board.  Multi-colored layers can also be used or color applied after the etching, if desired.  It became a popular medium for illustrations due to its clear, fine lines that could be photographed without losing quality.  In the 1930s to 1950s, it was one of the preferred techniques for medical, scientific, and product printing.  The engraving is accomplished by using sharp instruments primarily, such as an Exacto knife or scalpel.  However, other tools such as sandpaper, steel wool, brushes, and any tool the imagination can provide are also practiced. Scratchboard is not widely known and is considered by many artists to be one of the most challenging mediums.  It is a very time consuming work as all textures are created by fine scratches.

Some of Esther’s work looks photographic, it’s so precise, and a single work can take days to complete.

Here are some more examples of the art from this stunning exhibit: 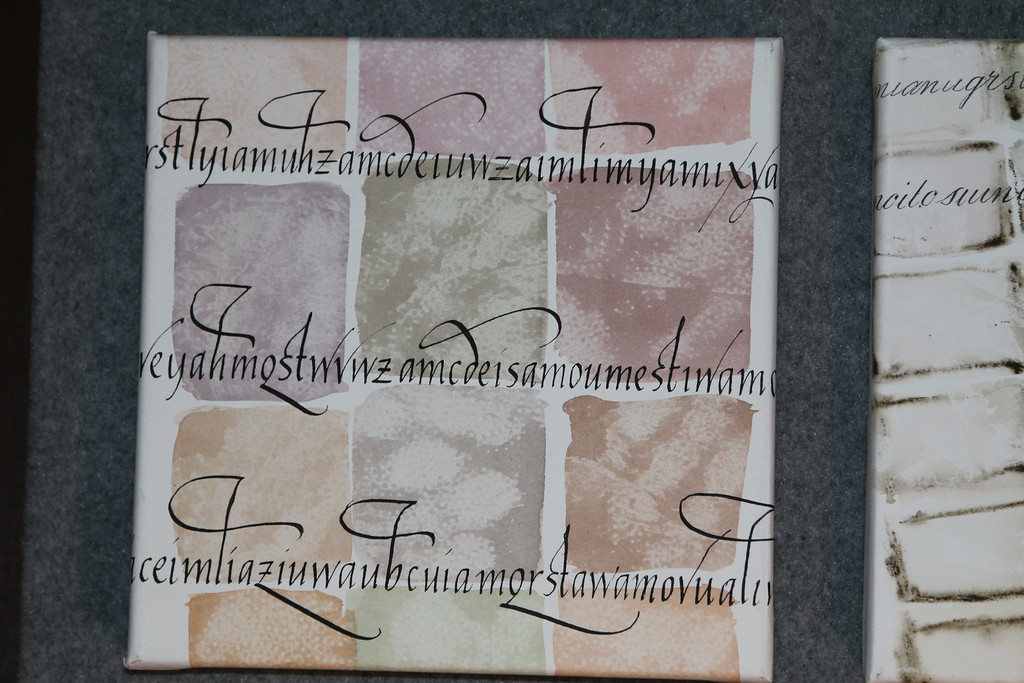 Coyote Pup plays on the beach