If you don’t live in the Charleston area, you might be surprised to hear the sometimes it floods even when it’s not raining.  And this week has provided some of the highest tides in six years, due to the confluence of wind and astronomical factors.  Here’s a link to the Post and Courier article about that.  It definitely has been impressive, as two additional feet of water has inundated the lowcountry.  Today’s post will be photos of Dewees areas with flood waters– but later will attempt to put that into historical perspective as we look at the way our island community was designed to handle significant tidal events, and how we plan for the inexorable ebb and flow of sand on the beach.

Here, for example, is a photo shared by fellow dunes agent Kristin Badger Walker, on her blog Charleston Inside Out that she found on Historic Charleston’s Instagram page: I think it’s showing sea water that is inside the battery walls and rising. 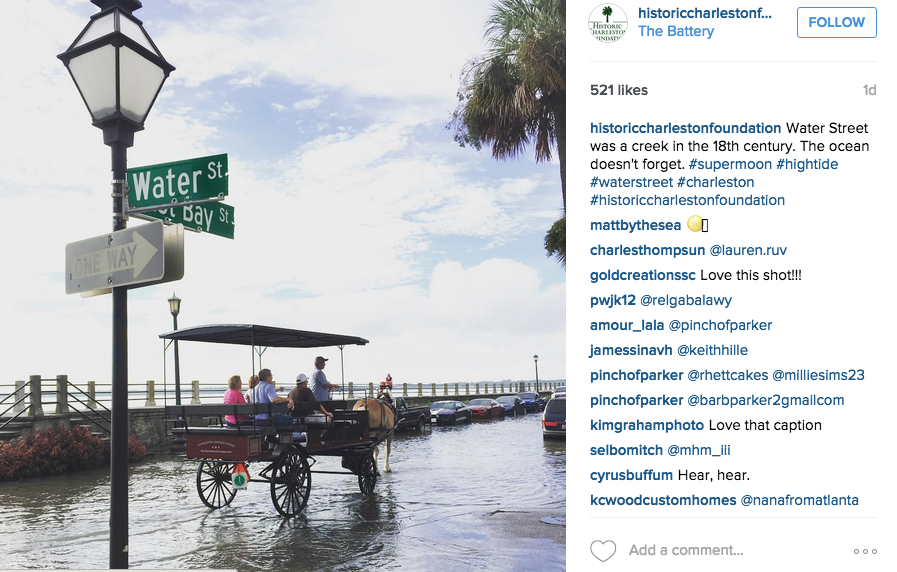 On Tuesday, we wanted to get some photos of what the highest tide looked like along the waterway and on Dewees.  High tide was at 10:30, so we dropped the kids off to their various school locations, and motored back along the waterway.  Although we experienced no issues along 41st street approaching the marina, the visitors who were coming to the island on the 10:00 boat took this:

And this was the view along the waterway:

As we approached Dewees, we were pretty high in the water:

Because the tide was so high, the sea ark could come right up to the bulkhead for easy unloading:

Although the tide made it onto the causeway, flooding was not significant:

And while there were a few spots along Old House Lane where the tide came up, the rest of the roads were fine:

Over on the beach side, the high tide came up to the edge of Ancient Dunes walk:

This was at the exact moment of high tide, and as that wave receded, I could get to the water and take it looking the other direction.  Most of the dunes at this point of the island are just fine:

It is on the part of the island where there is no human habitation that the water came over the road, which it does occasionally at this time of year.  I remember one birthday of Ted’s where we couldn’t get to the north end of the beach.  The tide came in from the waterway side at the intersection of Old House Lane and Lake Timicau:

While this is unusual, it’s happened before on Dewees– Here’s a post from November 2012 with big tides. And here’s one from 2009. Every few years we get a big one out here.  Most of our plants are salt tolerant, and the island community was carefully designed so that rising tides have places to go.

Here is a hyperlapse video Reggie took of Tilly exploring the puddle on the north end with us– on foot, because we didn’t want to drive the golf cart through the puddle:

(As I was working on this post, the weather has changed to add rain to some of this coastal flooding, so we’ll see how it goes. Yesterday we got 3 inches of rain)