Sometimes I think Pelicans are the clowns of the bird world, and sometimes I am awed by their grace. The bird featured below caught a huge red drum, and I wasn’t at all confident he was going to be able to eat it!

The pelican we are most likely to see on Dewees is the Eastern Brown Pelican. (Although we have seen White Pelicans on nearby Capers Island). It is the only pelican that feeds by plunge diving, and they can drop from great heights. According to Birdscope at the Cornell Lab of Ornithology, Pelicans have several adaptations to diving, including air sacs beneath the skin on their breast that serve as cushions and floats. While diving, they also rotate their body to the left, probably to avoid injury to their trachea and esophagus, which are on the right side of neck.

The eastern brown pelican was listed as an endangered species in 1970, when their population plummeted to less than 100. Widespread use of pesticides such as DDT caused thinning of eggshells, which subsequently broke during incubation. The United States ban on DDT in 1972 and similar pesticides spurred the pelican’s recovery to much of its former range. The implementation of the Brown Pelican Recovery Plan of 1979 also contributed to the restoration of brown pelican populations. (SCDNR) Now they’ve had such a spectacular comeback that they’ve become a symbol of wildlife conservation, and they’ve been delisted from the endangered species list. 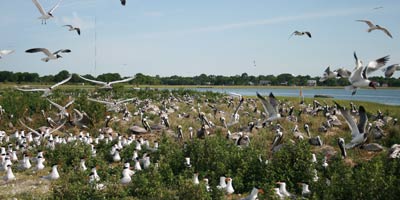 , with large colonies of other pelicans and other colonial nesters, like terns and black skimmers.

They are strong swimmers, with webbing between all four toes. Their colors are brighter in breeding season, when they have one monogamous partner for the whole of the breeding season. Juveniles are brown with a white belly, and it takes three years for them to change to adult plumage.

In addition to plunging, they can also seize food from the surface of the water. Pelicans have a gular pouch that helps them catch food, and a hook on the upper mandible to help hold slippery fish. I came across this explanation for how it works at a website called How Stuff Works:

Another unique feature is the hook at the tip of the pelican’s upper mandible (the top half of its bill), which helps grab onto particularly slippery or wiggly fish. After locating and scooping up its prey, the pelican opens its bill and slowly contracts its pouch to empty out the water and keep the fish inside. Then, with a jerk of the bird’s head, the fish slides down the ­hatch. If a fish is particularly large, the pelican might manipulate it so that the fish goes down head first, which helps keep it from getting stuck. A pelican can’t eat or fly away if its pouch is still full of water, so the draining process is very important. By bending its neck, it can even turn its pouch inside out.

They can also soar right above the surface of the water, using the slight updrafts from the wave troughs in a process called dynamic soaring. This allows them to save energy as they fly.

This juvenile clown was fishing from slightly above the surface in Chapel Pond. 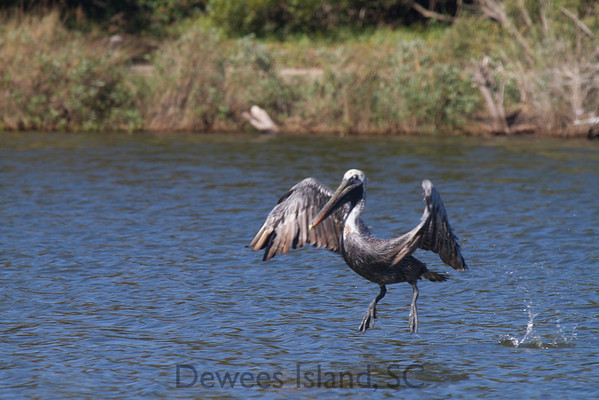 when he caught a fish that must have been bigger than he expected:

and even though he tried to keep it to himself,

his friends swooped in and clamped down on his beak

After shaking them off, he retreated to a spot where he could regroup

and try to wash the fish down with water. 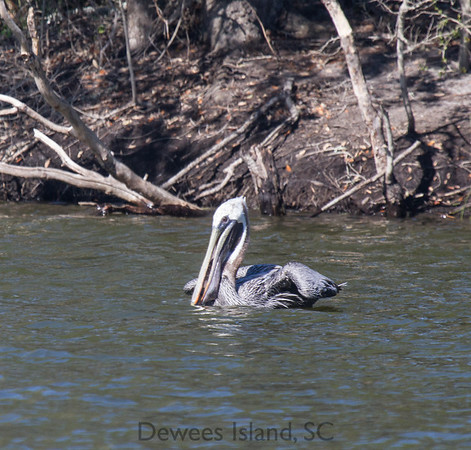 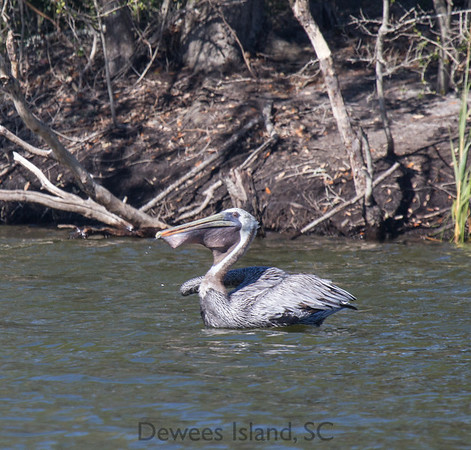 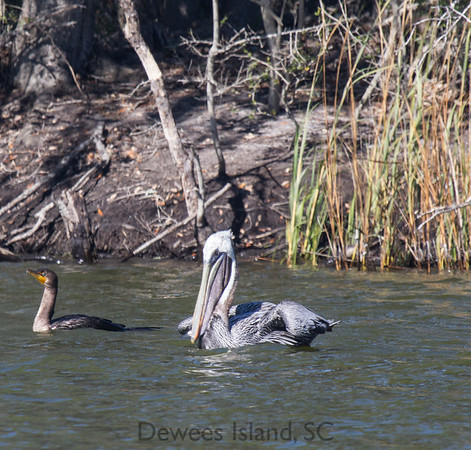 and he finally moves on after somehow washing the fish down.

Here is a related post about releasing a Pelican after rehabilitation.

At a workshop at the South Carolina Aquarium, I told the story of watching this pelican, and wondering if the pouch could withstand all that action. The bird rehabilitation specialists told me that the bird was lucky– if he (or one of his exuberant friends) had punctured the gular pouch, there is almost nothing that can be done for them– sutures won’t hold, and trying to repair a tear actually makes the situation worse. Most birds with gular pouch punctures have to be euthanized. So I was glad to see this guy finally move along!

It’s Bat Week! The story of a Tree Bat on Dewees