“I am actually looking at a wild Bald Eagle chick!” I can’t really get my mind around that fact as I shiver in the north wind on a nearby rooftop. At this point, the chick is several weeks old, and apparently capable of being left alone for stretches of time that might last 30 minutes or more.

Growing up in the 70’s with prognostications of silent springs and the extinction of the National Bird, I get a serious rush of awe looking at this majestic bird and her chick. The odds seemed so small of the eagles actually hatching an egg on the unlikely site of an osprey platform in the first place, since eagle nests are often huge 3 ton affairs in the tops of pine trees.

And yet, we have been able to watch this eagle pair court and mate, deliver sticks to the top of the platform, take turns on the egg, hunt over the impoundment, fight off predators, and now, tend to the needs of the chick.

At the moment, the chick waits for a parent to return, crouched down against the icy wind, and we can’t really see it. Once the mother returns, he sits up. I’ll confess that I have been waiting for her to bring food of some sort, and am a little disappointed to find her with empty talons. Together, they balance on the slightly swaying, small structure, and survey the vast views of marsh and forest, sea and shore. An one point, the parent crouches into a defensive posture, and I look up to see her watching an osprey. 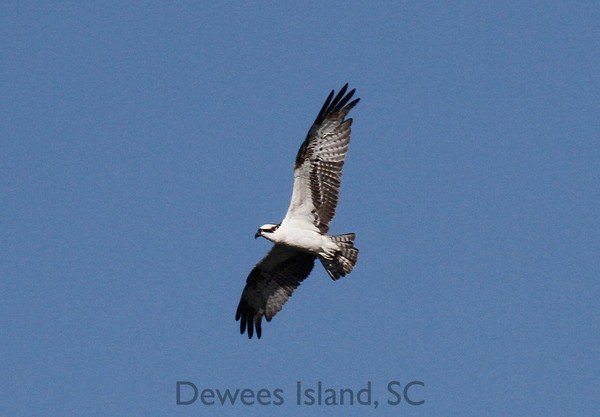 I am actually hopeful for another aerial display, but the Osprey thinks better of it and moves on. She continues to watch it go lower, and eventually moves off the nest, this time perhaps to bring food. The nestlings in my own house are no doubt clamoring for breakfast as well, so I will have to check on this baby again later.