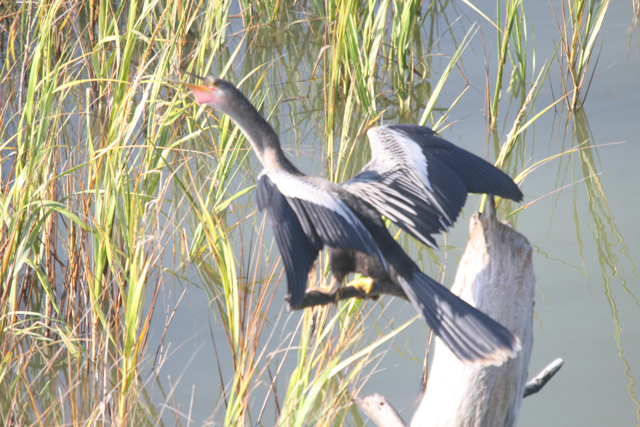 The Anhinga, Meleagris gallapavo, (literally “water turkey” because of its feathers) is also known as the snake bird.  It is generally found in fresh water, and needs fresh water for nesting.  They inhabit shallow wetlands, and can be seen in the water or on overhanging branches. In order to be more hydrodynamic, they have dense bones and plumage that doesn’t store air (like goosedown does). 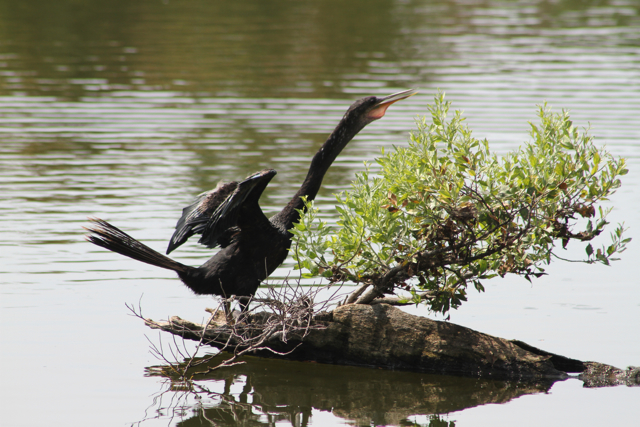 Unlike most diving birds, the feathers can get completely wet while they are under water.  They therefore lose a lot of body heat while swimming, which they make up for by soaking in the sun’s warmth for thermal regulation.  Anhingas are equipped with very strong neck vertebrae, which they use for stabbing prey (spearing) and then tossing it strongly enough to release it off the bill and catch it in their mouths.  They can fly long distances without flapping their wings, soaring the way a vulture might.  In the sky, you’ll see them flying with their necks outstretched in a sort of cross shape.

When you see an anhinga swimming in the water, you will only see the top of the head and neck

— (usually you will see the top of the back on a cormorant.) If you go to the Huyler House area behind the oyster shed, you will find a small log with a tiny tree on it.  The anhinga commonly found at this site may growl and bob his head at you to tell you to go away.  Here’s a video of an anhinga at Huyler House pond.

Anhingas may need more fresh water for nesting, because we have not identified a nesting pair on the island.  They do, however nest at nearby Magnolia Plantation in the spring.  I went there for a field trip in May, and was delighted to see large fluffy babies in nests leaning out over the pond.