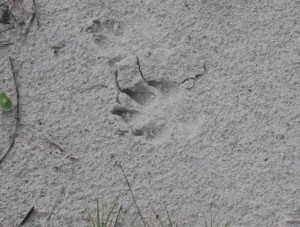 There have been reports of cats on Dewees for years– a large panther sized black cat, a bobcat, etc.  However, we haven’t had proof that could be shared, like scat or tracks.  This morning, Gary paused on Needlerush walkway to watch a pair of deer off to the south.  He suddenly noticed that the deer were being stalked by a large cat, crouching and moving across the boardwalk.  His first impression was that it was a bobcat, but more reddish with some spots.  The cat eventually startled and moved off into the maritime forest to the south.

Last night’s heavy rain had rendered the sand hard-packed and textured with raindrops, and when we got there 15 minutes later, the tracks were still very clear.  Our first impression was that this is a BIG animal– the tracks are huge. 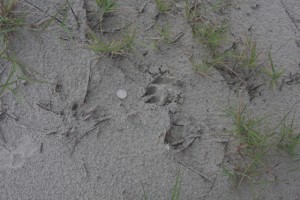 (We used a quarter in the photos to give a sense of scale.)  In addition, there are two sizes of tracks– one smaller and one larger.  We aren’t sure if the front and back paws are different sizes, or if the texture of the sand or the speed of the animal made a big difference.

After convincing Ed from public safety to let me scour the naturalist supplies for plaster of paris, (unsuccessfully) we called the Mashmans, who actually had some plaster, and they came out to help us make casts of the tracks.  Photos are one thing, but a 3 dimensional cast is another.

Kudos to Darlene, who came prepared with measuring implements and a plastic bag to mix in.  We’re also really glad of her suggestion that we practice with the less desirable tracks so we could learn what consistency works best. It was interesting that as the sand warmed and began to dry out, the tracks became less distinct.

So we had a great time pouring plaster into the tracks, and we left it there for at least an hour to dry.  We returned to retrieve them and voila!  We can even see the claws on one of them.  Can’t wait to share with Lori and DNR to see what they are thinking.

Lori sends us these links: